How to host high tea: a lesson 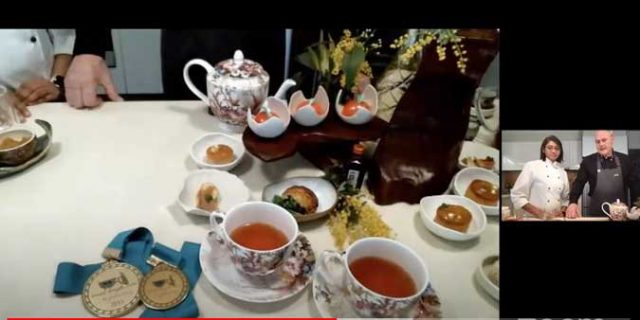 FIRST: a vocabulary lesson. People tend to think of high tea as a more formal occasion than afternoon tea. High tea is actually more informal and was called such because of the height of the table used during that meal with heavier tea, almost like a prelude to supper. An afternoon tea is what you’re after when you’re thinking of fine china and muslin dresses.

Dilmah Tea CEO Dilhan Fernando hosted tea on the company’s YouTube channel in a discussion titled How to Host a Revolutionary High Tea on July 16. While in a sense, he was hosting a tea for the world, the company had done that already with a series of competitions called the Dilmah Real High Tea Challenge beginning around 2007. For the challenge, the company traveled the word (hopping about from the Middle East to Europe to New Zealand, and many of the countries between them) awarding prizes to innovative dishes to serve with tea.

“It’s no longer about scones; no longer about cucumber sandwiches,” Mr. Fernando said of high tea. “That’s good, but things have changed.” He recalled a good memory of having been served empanadas with tea in Latin America. “Our Dilmah Real High Tea revolution was about sustainability, respecting ingredients — it was about the personality of the people that were presenting.

“It was about afternoon tea specific to the people, the ingredients of each location.”

The 2012 National Champions for Australia and the Sustainability Champions for the global competition Selvana Chelvanaigum and Ian Jones joined the video through a video call, and showed why they won.

Mr. Jones started by pouring Dilmah’s Berry Sensation in flutes dusted at the rim with pulverized strawberries. He plopped strawberry slices in each one, then topped it off with prosecco.

Ms. Chelvanaigum, meanwhile, talked about the dishes: cured barramundi with caramelized potato, beef in a red wine sauce in puff pastry, and a brown sugar apple filled with fennel crumble and uda watte (a single origin tea offered by Dilmah) jelly; and poached apple with Dilmah Chai syrup. Gesturing to a wooden stand on her counter, she said that it was made from polished wood that had been discarded. “You don’t always have to have a stand that you bought in a shop,” she said.”This is a good way to keep sustainable instead of buying new things.”

Mr. Jones, after decanting and pouring a second pot of tea (a bit conventional, and no longer in the style of the previous spritzers) gave tips on serving tea. “You don’t need to have, as you said, cucumber sandwiches and high tea stands, or things like that. You can have a high tea with just a few little things. Just make the tea properly, and enjoy your high tea.” — JLG

Work on Cebu container port to start in January