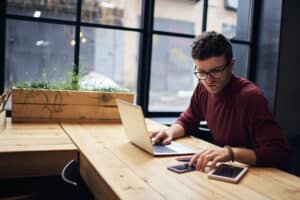 New research has found more people have turned to freelancing alongside employee jobs during the pandemic.

Nearly one in five freelancers are now self-employed as a side-hustle alongside an employee position. Nearly two fifths of these said they started freelancing in the last 12 months, suggesting a spike in the number of side-hustlers during the pandemic. Nearly quarter of those freelancers surveyed also said they had gone into self-employment to add to their main income.

People’s motivations for taking up a freelancing are overwhelmingly positive, with over half citing desiring greater flexibility and over two fifths saying they wanted to increase their income.

The rise in the number of side-hustles and other freelance work is reflected in the PeoplePerHour platform. During the pandemic, PeoplePerHour has seen its biggest rise in registrations for more than a decade. Almost a quarter of a million people applied to use the platform in 2020, up from 136,000 in 2019. Globally, it was a similar story with a 61% jump in freelancer registrations on the platform.

Of those people who signed up to the platform in 2020, over a third said they did so because they lost their job or were furloughed due to Covid 19, 40 per cent wanted to increase their income, and 20 per cent wanted to switch to freelancing full-time.

Andy Chamberlain, Director of Policy at IPSE (the Association of Independent Professionals and the Self-Employed), said: “There has been a remarkable increase in the number of people working a freelance side-hustle. This seems to be a function of the additional time many employees have got out of the pandemic – whether because they have been furloughed, unable to work their normal jobs or simply because they are no longer losing time to the daily commute.

“For some, of course, this trend reflects the need for additional income because of the financial hit of the pandemic. For others, it seems likely this is a positive trend: that they have been able to use their extra time – and the flexibility of freelancing – to explore hobbies and passions and turn them into added income.

“The key is for the government to ensure there remains a welcome and supportive business environment for these new freelancers once the country opens up again: to support this new enterprise whether people are fully self-employed, or part-time freelancing alongside other work.”

Xenios Thrasyvoulou, founder of PeoplePerHour, who commissioned the research, commented: “Just like the Bank Crisis before it, the pandemic has proven to be a powerful catalyst for people to reassess their work lives. Whether this is through freelancing full-time or supplementing their employment with a side-hustle, British workers are exploring the best way to take control of what they earn.”

Holly Walker, 27 from Windsor, was furloughed last year and started her side hustle of becoming a print & graphics designer specialising in clothing. Holly: “I started freelancing as a back-up for losing my job as a Fashion Print Designer for a high-street clothing supplier during the pandemic, and to keep doing what I loved every day (designing). I wanted to expand on my portfolio & client base. Furlough created the perfect time to start. It has had its­­ ups and downs, but I would say I have been pretty successful with landing projects as a new freelancer.”

Holly continued: “I love the flexibility in choosing your own hours and I enjoy having more control in choosing what jobs I work on. It has allowed me to work on a great range of different briefs, which has taught me a lot about my skills and has made me a lot more confident as a designer. I would love to do this full-time post the pandemic, if I could make it so the income was more stable, by working with more regular clients then I would definitely consider taking up the side hustle as my main form of income.”

Moderna applies for emergency COVID-19 vaccine use in the Philippines