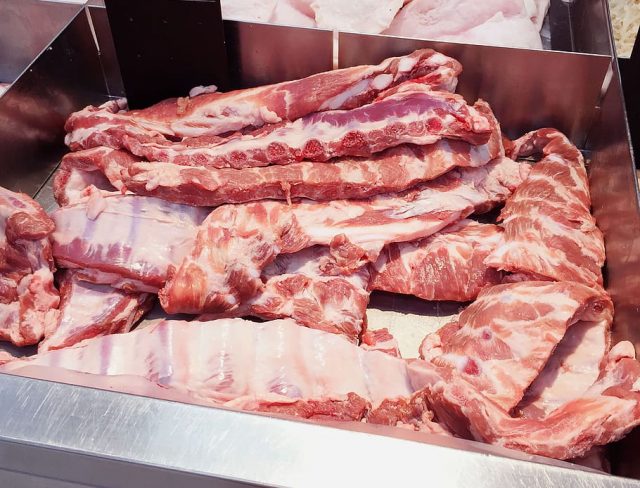 THE PHILIPPINE Chamber of Agriculture and Food, Inc. (PCAFI) said it supports the imposition of price ceilings on imported pork products, which will be allowed entry at lower tariffs, to ensure that the tariff savings are passed on to consumers.

At a House hearing Monday, PCAFI President Danilo V. Fausto said Executive Order (EO) No. 128 issued by President Rodrigo R. Duterte is designed to lower prices of pork products overall to between P215 and P222 per kilogram, though there is no guarantee importers will take the savings from lower tariffs for themselves as profit.

“What I’d like to propose if possible is to impose a price ceiling for imported pork so that the importers who will benefit from the tariff reduction pass this on to the consumer, not to their pockets,” he said.

He added this is “just to make sure that the suffering of hog raisers (from greater import competition) will benefit the consumer and not the importer.”

On Monday, the House Committee on Agriculture and the Committee on Trade and Industry held a joint hearing on rising food prices.

Agriculture Secretary William D. Dar said during the same hearing that the Department of Agriculture will study the proposal of the PCAFI.

EO 128 reduced pork tariff rates from 30% for imports within the minimum access volume (MAV) quota and 40% for imports beyond the MAV to 5% and 15% respectively. The move is meant to lower prices of pork products overall by expanding supply.

The National Economic and Development Authority (NEDA) said lowering tariffs will result in P13.5 billion worth of foregone revenue for the government but will ultimately produce savings of over P61 billion for consumers.

“Kung titingnan natin ang (If we look at the) savings in terms of consumer expenses, expenditure ng pork, we would be saving for the consumers P61.5 billion if they are able to buy pork at P215 or P220 per kilo,” NEDA Undersecretary Mercedita A. Sombilla said at the hearing.

Ms. Sombilla’s estimates were similar to those reported by the Federation of Economic Freedom on Sunday, which expressed support for the pork tariff reduction.

Marikina City Rep. Stella Luz A. Quimbo said her own estimates indicate that the revenue foregone will only be P1.56 billion based on Bureau of Customs pork imports data from 2020.

She added that since tariff reduction will be accompanied by an increase in the MAV quota from 54,000 metric tons (MT) to 404,000 MT, the government could realize a gain of P4.36 billion. — Gillian M. Cortez

On to the tax audit period

Philippines to resume use of AstraZeneca