An untidy room could cost you your dream job, new research finds 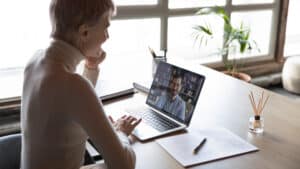 New research has found almost a third of interviewers admit to not hiring someone based on something they have seen in a candidate’s video backdrop, with a further 58% saying a messy room in the background could cost someone the job.

A poll of recruitment decision-makers reveals modern day job interview faux pas, such as 20% of calls have been joined by the household pet. Other interviewees have been caught short, with 13% standing up mid-call to reveal they are dressed in joggers or underwear.

The research, conducted by BT Skills for Tomorrow, also polled people who have taken part in a video job interview over the last 12 months. The pandemic has meant job seekers have had, on average, three virtual interviews during lockdown, with most interviews now conducted via video. Remote interviews are likely to remain the new normal with 42% of interviewers wanting to continue this way after COVID-19 restrictions are lifted.

While unreliable audio was also among the most common issues, one in 10 also admitted to answering a phone call during the interview. Video backdrops are viewed by some as a representation of a candidate’s work ethic, as more than two thirds of interviewers believe that applicants did not put enough thought into their background when on a virtual call.

More than half of interviewees believe video interviews are harder than those done face-to-face, and 30% have deliberately placed an ‘object of interest’ in shot behind them, to use as a talking point.

With 4 in 10 job seekers unable to land a job from virtual interviews, people need some support to impress potential employers over video. A number of candidates are already being proactive, with a third carefully tailoring their backgrounds to create a more positive impression, including books, awards and house plants.

BT Skills for Tomorrow is offering free resources and advice to support job seekers across the UK prepare for a digital future. This includes an upcoming interactive webinar – ‘be a hit at interviews’ – on 19 April 2021, designed to help jobseekers improve their interview technique, whether that’s by phone, on a video call or in person in the future.

Hannah Cornick, Head of Digital Impact, Consumer said: “Video calls are going to remain part of the hiring process well into the future, and there is an opportunity for candidates to use this to their advantage.

“Being in control of your environment and in a familiar space can help reduce nerves and allow you to showcase your personality. While you can’t always plan for unexpected interruptions, there are things you can do when preparing for a video interview to ensure you come across professionally and set yourself up for success.

“This is the time to show the interviewer your strengths and how you stand out from the crowd, without any distractions from your surroundings.”

The tax implications of remote working abroad: What employers need to know

Business LPAs – How to safeguard against a future incapacitated partner, director or shareholder