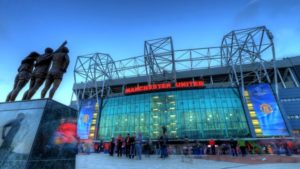 COVID-19 has had a major financial impact on English soccer club Manchester United, forcing them to borrow £60 million to cover their losses, according to the club’s latest quarterly financial results between December and March.

Estimates suggest that the club has lost over £100 million in income over the last year, representing a reduction of 19%.

The biggest hit to their profits is the lack of revenue from gate receipts. With Old Trafford crowds typically reaching up to 75,000 per game, the ban on fans attending has hit them hard. The club confirmed that matchday income fell by 94% compared to the same period in 2019.

Manchester United says that they were forced to draw down £60 million from their £200 million credit line to protect them from the impact of their rising debt mountain of £455.5 million.

Broadcasting revenues have helped to mitigate some of the potential losses and, during the last three months of 2020, the club increased their broadcasting revenue to £108.7 million. With supporters unable to attend matches, there has been a growing demand for live football from fans and their return to the Champions League improved this demand greatly. This led to a 2.6% growth in revenue in the last quarter of 2020.

Manchester United are not alone in suffering a devastating financial impact. The pandemic is set to cost top European clubs £1.7bn.

The challenges will continue for the remainder of this Premier League season as matches will continue to be played behind closed doors until the last week of the season. It is hoped that the club will have a reduced crowd back in the stadium for their match against Fulham on May 15.

Premier League broadcasting rights are to be re-negotiated at the end of the season. Future TV deals are likely to see a drop in the UK market but, with an increase in demand from overseas markets to compensate, there is reason to be optimistic.

The executive vice-chairman, Ed Woodward, remains hopeful despite the challenges faced by the club. Whilst he views COVID-19 as a “once in a century crisis”, he sees promise for the future. Woodward says that the club’s values and resilience have been challenged but with the reintroduction of reduced capacity crowds, things will begin to return to normal. He was also pleased that Manchester United have climbed to second in the Premier League this season.

Woodward praised the UK’s rapid rollout of vaccines and was delighted to see the falling infection rates of the virus. The UK Government’s roadmap out of lockdown includes plans for the gradual reopening of sports stadiums to spectators. Starting in spring 2021, smaller crowds should once more be able to attend matches and, by next season, it is hoped that crowds will be returning to full capacity.

The 21/22 season looks promising for Manchester United. Not only for the fans who will once more enjoy attending their beloved Old Trafford but also for the financial stability of the club. In the meantime, football fans have to make do with televised games, reading sports-related content, like this ranking of players who scored the most Premier League own goals, and trying to get their hands on the limited amount of tickets available for the stadiums that are allowed to operate with reduced capacity.

Pay As You Go or Monthly Subscription? A User’s Dilemma in the Online Dating World